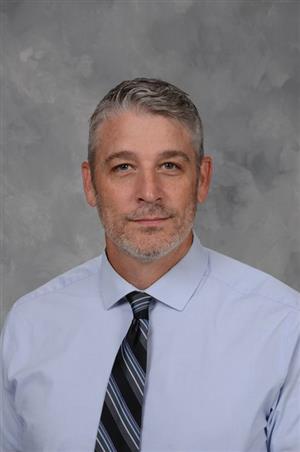 Wimberley ISD is pleased to announce that Mr. Ryan Wilkes has been named the next Principal of Wimberley High School. The WISD Board of Trustees unanimously approved Superintendent Dr. Greg Bonewald’s recommendation at its special-called meeting on August 3. The move will go into effect following the conclusion of the 2022 Fall Semester when current WHS Principal Jason Valentine assumes the duties of WISD Assistant Superintendent.

“It is a great honor to be selected as the next Principal of Wimberley High School, especially considering those that have preceded me as principal: Mr. York, Dr. Bonewald and Mr. Valentine. All three have had a profound impact on my educational career,” Mr. Wilkes said. “WISD has a legacy of excellence and I am excited to be able to continue that legacy alongside our outstanding staff, students, and parents at Wimberley High School.”

Currently an assistant principal at Wimberley High School, Mr. Wilkes has been with Wimberley ISD for 12 years in all, including the last three years as Assistant Principal. He also served nine years as a teacher, including four of those years on the coaching staff for the football, basketball, track, and powerlifting teams. During his time as a teacher, Mr. Wilkes also coached the UIL Science team (guiding the team to a State Championship in 2016), served as senior class sponsor, and taught Chemistry and Physics. This summer he was named the Texas Association of Secondary School Principals (TASSP) Region 13 High School Assistant Principal of the Year for 2022-2023. Mr. Wilkes is a 1995 graduate of Wimberley High School and his wife Michelle works at Jacob’s Well Elementary. They have three children that attend WISD schools.

“Ryan is a man of high character who has a genuine heart for supporting all students and staff.,” said WISD Superintendent Dr. Bonewald. “As a WHS graduate, Ryan has a deep understanding of the important traditions and culture that make our high school campus, our school district, and our community an amazing place to live and work. WHS is positioned to have a smooth and productive transition of leadership over the course of the fall semester,” he added.

Mr. Valentine and Mr. Wilkes will continue their current roles (Principal and Assistant Principal, respectively) through the first semester of the 2022-23 school year, allowing an extended period of on-the-job-training for Mr. Wilkes prior to him assuming his new role in January 2023.